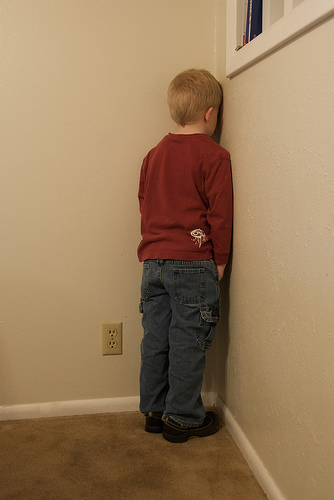 While some American parents are beginning to question the use of hitting (aka spanking) as a form of disciplining children, the use of time out is on the rise, as evidenced by the popularity of such shows as Supernanny and Nanny 911 (read about Alfie Kohn’s views on the subject in his article Atrocious Advice from Supernanny).  The premise behind the traditional use of time-out as a punishment is to give the child  time to think about what they have done based on B.F. Skinner’s theory of operant conditioning, though Skinner himself was against the use of punishment in an attempt to control children’s behavior. While many parents believe that the use of time-out is less punitive and harmful than hitting, even being touted by many who supposedly practice gentle discipline, evidence shows otherwise. This authoritarian approach is a form of bullying.

Children placed in isolated time-out do not think about what they have done. They are not spending the time cooling off, thinking about how they could better have handled the situation or how they might rectify it. Instead, most children will go through multiple emotions – fear that they are not loved because of their behavior, anger at the situation and the person responsible for sending them to time-out or at the other person involved in the original situation, blame, anxiety or confusion if the child doesn’t undertsand what is going one. They learn that by bullying someone holding less power than you, you can get your own way. Aletha Solter has a concise article concerning The Disadvantages of Time-Out at the Aware Parenting Institute.

Time-outs, besides resulting in a myriad of other problems, do not address the original issue. Children in time-out are not learning new coping or communication skills which they can use to solve problems and conflicts. They aren’t thinking about solutions for the current situation. The concept that children must feel badly about themselves in order to learn stems from beliefs that children are born evil and must be taught to be good. There is a definite need for parents to examine their own histories and philosophies before any significant change can be made in our culture. Until then, the cycle will continue.

3 thoughts on “the disadvantages of time-out…”