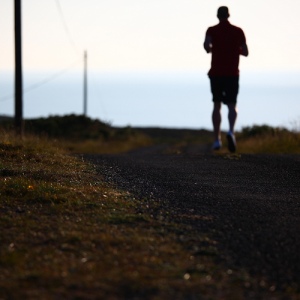 I’m not a runner. I never have been. Just the thought of running makes me want to fall in a wheezing, asthmatic heap. Recently, though, I’ve been thinking about taking up running.

Running has always been a very romantic idea to me. A solitary sport, one can spend time with one’s own thoughts – perfect for someone who has a constant philosophical debate going on in their head.
Biologically speaking, humans are meant to run. We are built to run from danger and to find food, neither of which we generally need to do in our techno-society. It’s a wonderfully healthy way to keep in shape. The runners I know are some of the healthiest people I know.
On another level, though, there seems to be some psychological benefit to running. Runners are in tune with their bodies. In being so, they tend to have healthy self-body images, of which I am sorely lacking.
So here I am – afraid of wheezing to my death on the side of the road and yet understanding that this is probably something I need to do – for both my physical and psychological well being. Small steps to a better me.

5 thoughts on “I May Take Up Running”