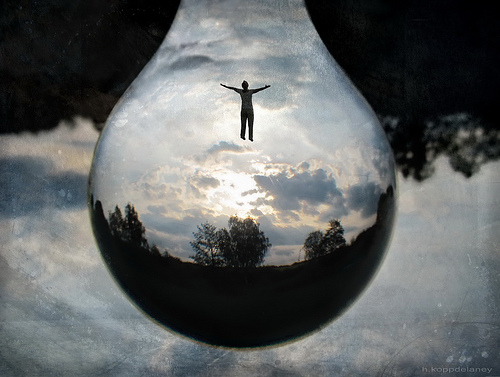 Adults utilize many different methods in order to control the behavior of children, whether through punishments or rewards, in an attempt to have what they deem are respectful and well-behaved kids. What I think many of them fail to realize is that one can only truly control one’s own actions. We can never completely control another person’s actions. Sometimes we can create the illusion of controlling someone, but it’s never true control. Every person has the ability to make their own decisions, and while some will choose to humor you or feign compliance in order to avoid punishments or receive rewards which they feel justify the actions, they are still in control of themselves.

By attempting to control another’s behavior through extrinsic forces, there is a false dichotomy of control, and in it, no one has total control. My husband and I do not use punishments or rewards with our children. We talk to our kids. We listen to them. We discuss with them how our actions, words, and decisions affect ourselves and other people. We model appropriate behavior. In the end, the choices they make are theirs, whether or not we, as adults, acknowledge that fact. I would much rather my children do something because they have thought about it and decided it is right for them, than to react to someone else’s attempt at controlling them.

At the end of the day, when our children are all grown, we all want them to make the decisions that are right for them rather than doing whatever someone tells them to do. Just because someone says to jump off a bridge doesn’t mean it’s the right thing to do. If children are never allowed to make their own decisions in an environment where they have a loving parent to bounce ideas off of and who is there to help them, how will they fair when suddenly they have to make decisions on their own without having done so before?

11 thoughts on “the illusion of control…”