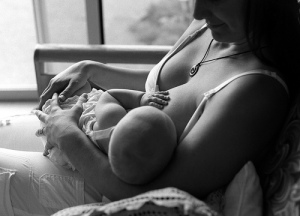 How do we normalize breastfeeding against such ignorance and intolerance? Some mothers (and fathers) prepare and practice informative and/or witty comebacks. Some work towards educating the public. Others are setting the example, either with a purpose in mind or merely by meeting their children’s needs by nursing anytime and anywhere. While educating others, meeting our children’s needs, and protecting ourselves are all important aspects of normalizing breastfeeding, I think we are missing the one thing that will go the furthest: empowerment!

Most of us have received a negative comment (or more) about breastfeeding at some time or other. If not, there are the comments about us, said loudly enough to make certain we hear them. How often have we heard positive comments?

Nothing we say is going to change these people. Expecting a majority to band together to support a minority is unrealistic, at best. Instead, I call for solidarity! Support other nursing mothers you see out and about. Anyone can do this. A kind comment, a cheesy smile, or even a thumbs up to show support goes a long way. If nursing mothers and their support networks (husbands, partners, parents, siblings, children) band together, we can empower each other (and future nursing mothers) and make a change. Vow to make a small difference in the life of a nursing mother you don’t know.

5 thoughts on “normalizing breastfeeding through solidarity…”