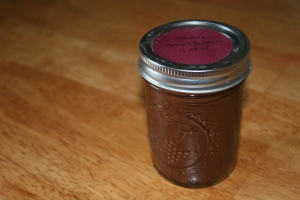 When I saw this Chocolate Peanut Butter on Stacy Makes Cents, I knew I had to make some for my husband. He loves peanut butter and anything that goes with peanut butter. The original recipe from Smitten Kitchen called for roasting your own peanuts. While I usually have almonds and pecans on hand, I don’t keep peanuts on hand. I do, however, on account of my peanut butter loving husband, have already made peanut butter in stock at all times. I decided it was perfectly acceptable to use store bought all natural peanut butter for this little endeavor.

I started with a pint of all natural peanut butter from Trader Joe’s. I added in 1 1/4 cups of  homemade powdered sugar (most store bought powdered sugar has corn in it) and 1/2 cup of Dutch process cocoa powder. And then my Blend-Tec blender decided that I must be joking, so I added a little canola oil. The next thing I knew, I had chocolate peanut butter.

I’ll admit that I’m not a peanut butter fan, so I called in my volunteer taste testers, who promptly declared it a success, equating the taste with that of Reeses Peanut Butter Cups. I was able to fill two 1 cup jars while having plenty left over for my 4 testers to have spoonfuls of the stuff. 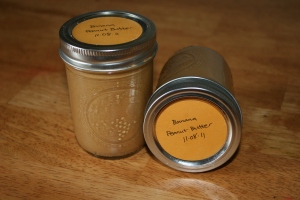 Of course, when I was gathering my supplies, I found myself wondering what other types of peanut butter I might make. As much as my husband likes chocolate and peanut butter, he loves banana and peanut butter. Any time we have bananas in the house, I find him slathering peanut butter on them for a snack. So, I had to try it.

To a pint of all natural peanut butter, I again added 1 1/4 cups of homemade powdered sugar. However, this time, I added 2 teaspoons of banana flavoring. I thought my blender might concede with the absence of the cocoa powder and the addition of the flavoring, but I did need to add some canola oil. Voila! Banana Peanut Butter. My taste testers swooped in and declared it an even bigger success. Given a choice, they voted on the banana peanut butter over the chocolate peanut butter.